Can someone explain to me what is Tag? I have a MyBlogLog and some people Tag me and I don't know what that is. Anybody? Thanks in advance.
Posted by Bento Pet at Saturday, August 11, 2007 7 comments:

Takuan is pickled white radish? It is supposed help digest food. It is also the most common pickle you can get from any Japanese restaurant.
Natto is made from fermented soybeans. Only Daughter number 2 and I enjoy Natto. The rest of the family shake their head in dismay whenever we eat this. At one time early this year, Daughter number 2 was consuming a minimum of 2 packets a day for months. It was almost addictive. I was competing with her and we found new methods of complementing Natto. Spreading Natto on fresh bread or bread crisp like canapes was absolutely delicious.

It's an acquired taste akin blue cheese in the western world, or 'smelly taufoo' in the Chinese, some say even worse than petai! It's got a strong taste and smell and is sticky with web like strings to an extreme extend like melted mozzarella cheese, but the stickiness just doesn't seem to 'tear apart'. 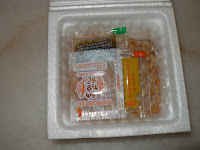 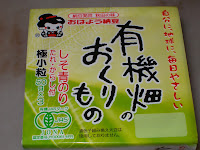 It comes in a pack of three and can be kept in the freezer. We've tried all types of brands and we found this one best. It normally comes with a pack of mustard, some shoyu and sometimes shiso or even chilli hot spice.

It is often said in Japan that nattō is good for health, and these claims can be backed by medical research. One example is Pyrazine contained within nattō. Pyrazine is a compound which in addition to giving nattō its distinct smell, also reduces the likelihood of blood clotting. It also contains a serine protease type enzyme called nattokinase[1] which may also reduce blood clotting both by direct fibrinolysis of clots, and inhibition of the plasma protein plasminogen activator inhibitor 1. This may help to avoid thrombosis, as for example in heart attacks, pulmonary embolism, or strokes. An extract from nattō containing nattokinase is available as a dietary supplement. Studies have shown that oral administration of nattokinase in enteric capsules leads to a mild enhancement of fibrinolytic activity in rats[2] and dogs. It is therefore plausible to hypothesize that nattokinase might reduce blood clots in humans, although clinical trials have not been conducted. Another study suggests the FAS in natto is the very substance bringing fibrinolysis of clots, which accelerates the activity of not only nattokinase but urokinase.[3]

Nattō also contains large amounts of Vitamin K, which is involved in the formation of calcium-binding groups in proteins, assisting the formation of bone, and preventing osteoporosis. Vitamin K1 is found naturally in seaweed, liver and some vegetables, while vitamin K2 is found in fermented food products like cheese and miso. Nattō has very large amounts of vitamin K2, approximately 870 micrograms per 100 grams of nattō.

According to the recent studies polyamine suppresses the excessive immune reactions, and natto contains much larger amount of it than any foods.[4] Dietary supplements containing the substances extracted from natto such as polyamine, nattokinase, FAS and vitamin K2 are available.

Nattō also contains many chemicals alleged to prevent cancer, as for example daidzein, genistein, isoflavone, phytoestrogen, and the chemical element selenium. However, most of these chemicals can also be found in other soy bean products, and their effect on cancer prevention is uncertain at best. Recent studies show nattō may have a cholesterol-lowering effect.[5]

Nattō is also said to have an antibiotic effect, and its use as medicine against dysentery was researched by the Imperial Japanese Navy before World War II.[6]

Nattō is claimed to to prevent obesity possibly due to a low calorie content of approximately 90 calories per 7-8 grams of protein in an average serving. Other unverified claims include improved digestion, reduced effects of aging[citation needed], and the reversal of hair loss in men due to its phytoestrogen content, which can lower testosterone that can cause baldness.[citation needed] These claimed physiological benefits of eating natto have been based on an analysis of the content of nattō, and have not been confirmed by human study.

Nattō is also sometimes used as an ingredient of pet food, and it is claimed that this improves the health of the pets.[7]

Kids were out for their activities. Dinner was only hubs, myself and Daughter number 3. 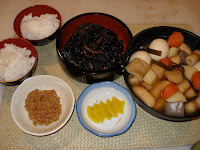 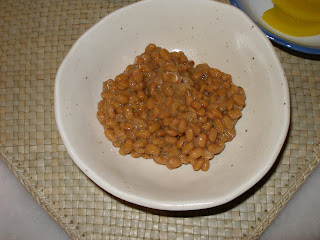 On the right is Natto, another of my favourites! 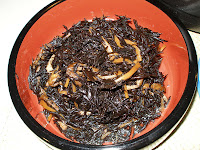