It's been ten days since I sent my maid back to Indonesia. After one year with me, we continued to have differences and many times I spoke to the agency to report "employer abuse"! Anyway, the issue is over. Mum and I have been trying to manage on our own and three girls have been very cooperative. I hope to survive until my new maid arrives in ten days time.

In the midst of all this, my good friend Deanna called early Tuesday morning and asked to meet up to have breakfast. I already had something planned but I rescheduled because she was leaving Wednesday afternoon for Abu Dhabi. We met, finished up some of her errands and had breakfast. When I dropped her off at another friend's house, she said a prayer and tears welled up in my eyes as we parted.

I could sense her excitement to meet up with her husband whom she's not seen for three whole months. She hugged me as she said "goodbye my best friend"! Till we meet again! Keep in touch! And so we shall...I sent her an e-mail yesterday so that when she reaches Abu Dhabi and logs on to the PC, I might be the first to greet her!

Yesterday mum had to rush off to Penang because her sister (my aunt) passed away on Wednesday morning! I couldn't go because of 1001 reasons - you don't want to know anyway!

Then on the news I hear that LUCIANO PAVAROTTI (link: "Pavarotti & Friends for War Child with Bon Jovi." )the Maestro a.k.a. "The King of the high C's' "has died (1935 - 2007)! It's a sad, sad day for many of his Operatic fans, including me! I remember reading in his autobiography one of his favorite quotes: "Every day I remind myself of all that I have been given. ... With singing, you never know when you are going to lose the voice, and that makes you appreciate the time that you have when you are still singing well. I am always thanking God for another season, another month, another performance."

Life is so unpredictable and so unexpected. Perhaps Pavarotti expected to die because he knew he had another type of "C" the big "C". Perhaps he even expected a miracle cure. I'm not trying to be philosophical here. I'm just 'mourning' in my own way - just blabbering along trying to make myself feel better to get out of this melancholy mood. I've linked Pavarotti to some of his memorable (may not be his best but my favorites) You Tube uploads for view. Enjoy!
Posted by Bento Pet at Friday, September 07, 2007 6 comments: 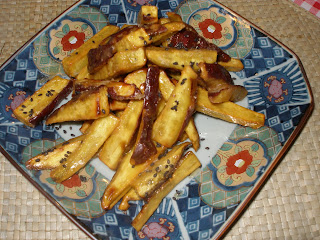 I'm sorry, there is no bento post this morning because the two girls didn't go to school.

I made this for tea yesterday - "Daigaku Imo" a.k.a candied sweet potatoes.

Method:
1. Dig out the 'eyes' from the cleaned sweet potatoes.
2. Cut sweet potatoes like 'fries', in long strips.
3. Steam for 5-10 minutes in steamer - check for 'done-ness' using a skewer.
4. When ready, pat dry the sweet potatoes and deep fry in hot oil until brown.
5. Drain on kitchen paper towels.
6. In a shallow non stick skillet, cook sugar, water and shoyu over medium heat.
7. Stir until sugar has dissolved and cook until bubbles appear.
8. Once the sugared sauce turns thick and has a glaze or gloss (caramelize) , turn off the fire.
9. Toss the deep fried sweet potatoes into the caramelized sugar and mix gently.
10. Quickly toss the toasted black sesame seed on top before the the caramelized sugar sets.

This is a very nice Japanese desert. Please try it.