I spend a lot of time conversing with my kids whose age range from 11 to 21. Lately I hear a lot of 'stories' which really are 'gossip' from some form of speculation formed from eavesdropping or by sight and thus drawing random conclusions.

When I hear these type of topics surface from our conversations, I am adamant about 'terminating' such frivolous talk. No, I'm not a self righteous goody-goody primp. I just think that it is my responsibility as an adult and parent to discourage young people in entangling themselves in such talk.

It is so easy to gossip about other people to create speculations from impressions when one is on this side of the fence. What if one was the subject and center of gossip and speculation? How would one feel? Such irresponsible and 'free' speculation lead to hurt, tears and sometimes end up even with suicides.

It takes discipline and even will power to avoid and to END the gossip when it reaches us. It needs a brave heart and a compassionate heart to trust that the gossip needs to end not only by my not repeating it but also to share with the one who 'informed' me why it should not continue.

Sure, it feels good to be in possession of some juicy gossip and it feels powerful to be the one who spreads it. But...can we really be responsible for it's consequences? Sometimes a lost friendship, a devastated loss of trust, even a potential suicide on our conscience?

Laugh at my face and say I'm calling bluff and I only have this to say, when you are young and the world is at your feet you have the privilege to make choices, thus make the right ones. END gossip now.
Posted by Bento Pet at Friday, April 09, 2010 No comments:

There's a great similarity in #2's palate and mine. We like strong cheeses, Natto and a whole lot of food that #1 and hubs dislike.

I'm one who likes to be adventurous and so I indulged a little and bought a block to try experimenting. It's been two days in a row where blue cheese and mushroom spaghetti appears. #2 wiped clean the balance sauce which was in the fridge.

The bento below doesn't need description but if you want the recipe, it's after the picture. 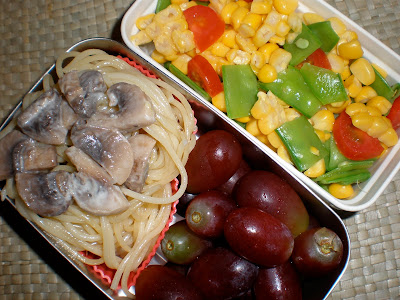 Method:
1. Add one tbsp of EVOO into a pan.
2. Toss the sliced garlic over low heat to soften and NOT brown.
3. Add the button mushrooms and saute.
4. Pour the cream and add the blue cheese.
5. Mash the blue cheese into the cream (it will easily soften and mix into the cream).
6. Salt and freshly ground black pepper to taste.
7. Once bubbles appear, switch off the fire and serve with spaghetti or toast.

Don't say I didn't warn you, this dish is not for the faint hearted!
Posted by Bento Pet at Friday, April 09, 2010 No comments: