I've been on an 'overdrive' mode over the weekend. Saturday night, we hosted a farewell party in our home for some of our senior youth members who are leaving for further studies overseas. Thank God it was pot luck and cooking was minimal for me.

Sunday morning, #2 had a Confirmands coffee morning at church. This 'food fest' was to raise money to fund their Confirmation camp leading to their sacrament of Confirmation next year. It's not so much for the monies raised but for the activity which brings the children to work together with their parents and with each other for the common purpose of the common faith.

I would have just sold sushi as I most often do for these fund raisers but with the recent increase in prices of Japanese ingredients, it was impossible make a decent margin from the effort.

I asked my mum if she'd help me make "Emperor noodles" (Wong Tai Meen - read in Cantonese) in Chicken soup for the coffee morning fund raiser.

A little insight on my mum - My late father says this of her "Give your mother anything "including a blob of sh*t" *joke* and she'd turn it into a gourmet dish"! My mum is an amazing cook and a terribly fussy one too.

She insisted on buying the chickens on Saturday morning itself and cooked and boiled the soup the whole day in preparation of the coffee morning on Sunday! Everything was FRESH and immensely delicious, as usual.

People kept coming back for seconds and 100 bowls were sold out on Sunday morning! It was exhausting and #2 quipped that 'hawkering' seemed like fun. At the end of the morning #2 added that perhaps studying for a Degree would better suffice!!! LOL!!!

After an exhausting morning and afternoon practice at Church, #2 had to go to Pudu for dance practice. On the way down, she said that she missed the bread from "The Loaf" owned by our former PM Tun Dr. Mahathir, which opened their first outlet in Langkawi and now at the Pavilion.

Hubs dropped #2 off to Pudu and zoomed off to Pavilion. So, we had tea at The Loaf and spent RM93 bucks on bread and cheese tarts!! Okay, I was a little greedy and I got carried away with all the nice looking pastries.

Hubs sat himself at a corner seat facing the main road overlooking a busy road. I ordered two cappuccinos and some pastries. First order RM49.

Then #1 calls hubs and asks him our whereabouts (she was out for an event with some friends and just got home). Hubs finishes his conversation with her and turns to me, asking me to 'ta pau' (take away) some 'plain' buns. Second order RM19.

Then I remembered that they had Cheese tarts, which incidentally I forgot to try the last time we were here. I went and 'ta pau' some. The girl behind the counter greeted me and told me the cheese tarts promo was buy 5 get 1 free. Being Malaysian and prone to greed I took up the promo. That cost me RM25.

Honestly, we enjoyed the cheese tarts and the pastries. It was delicious and it was worth every cent. Hubs teased #2 that she missed watching Dr. Mahathir tossing dough in the kitchen of The Loaf!!

Hahaha!!
Her reaction was classic - Yeah man! Dad!! *a little unsure* - looks in my direction - Huh!! You bluff me Dad!! As if Dr. Mahathir WUZ there!!! We all laugh and she had a great time munching her breads in the back of the car.

#3 was going to have left over butter cake with butter icing from the party and the last 3 chocolate chip cookies. I packed an apple in the top box. The apple slices were soaked in salt water - #3 reminded me so that the apples won't turn brown. 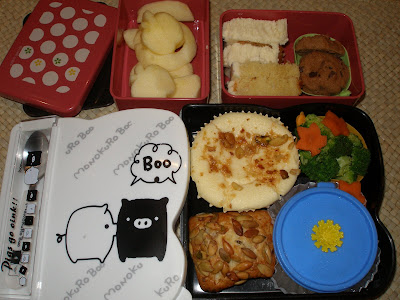 #2's box had a cheese tart and a pumpkin seed bread from The Loaf. I blanched some broccoli and cut carrots and packed them into a silicon cup.

The blue tub contains frozen lychee in syrup. This is to keep the contents cool so that the cheese tart won't go bad. You notice that I put a silver foil cup under the blue tub to contain the liquids from the condensation as the contents defrost. I didn't want the bread to get soggy. 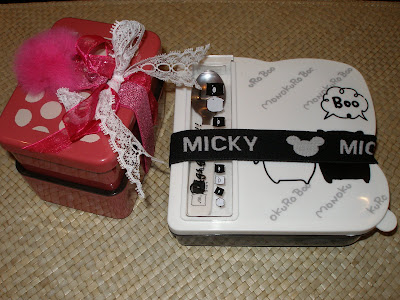 Both bento ready to go. After I sent them to school, I realized that I forgot their Oshibori! Blame it on Monday morning blues!!