My friend Emily introduced Thermal Magic cookers in her blog sometime last year. I was curious and asked that she help me purchase two pots.
Being first time user, I obviously didn't read enough how the pot worked to attempt continuous usage! What a waste!
I gave one pot to my mum which she uses to cook rice and I found use for mine, making yogurt! The yogurt is really easy to make in this pot and it turns out like magic! LOL!
Just fill the inner pot three quarter way with whatever type of milk you like and heat over the stove. Test the temperature over the back of your hand and if it feels warm then it's ready to add the yogurt "mother". Turn off the fire, stir in the "mother", close the lid and pop it into the outer pot and 'lock'. Leave for about 4-6 hours and you get deliciously smooth yogurt.
My mum gave me a 5L pot last year which was kept on my kitchen shelf. I had surfed the net about using the thermal pots and I didn't find very much encouraging information.
So, more than a year has passed and why all the sudden interest? I met a friend last week end and saw that she was using a 6L thermal pot. I was curious and asked her if it really worked?
She was a world of inspiration, recounting all the different methods and recipes which she had used the thermal pot. I was awed and my jaw dropped. To imagine that the thermal pot could actually do all that and save so much cooking gas? Seriously? I had to try it out!
I woke up the next morning and began preparing to cook a fish stock for dinner that night. I didn't know what to do so I just brought the water to boil in the inner 5L pot. I added the fish bones, two onions, some ginger, some ikan billis and freshly pounded white pepper. I allowed the water to come to a rolling boil for 5 minutes and popped the inner pot into the outer pot. Left it there for 6 hours before I opened it. Actually I was ready to bring the family out for dinner if this became an epic failure. 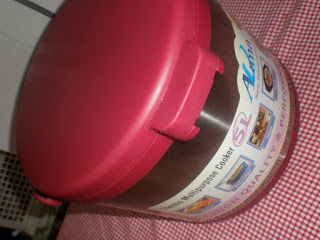 The result was a great surprise because after I scooped out the scum from the top, I tasted a clear and delicious soup! I was immediately sold to cooking soup in thermal pots!!!! 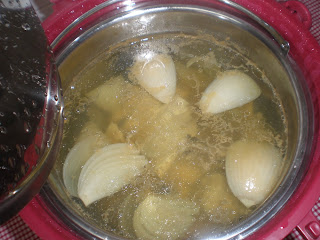 In my home, we drink soup every night at dinner. Regardless of whether it's a Chinese, Japanese or Western meal, we'd have miso soup or mushroom soup or something soup! When I boil soup a la Chinese then I usually boil the soup over a gas stove for at least 3 hours.
On the same day I tried cooking rice for lunch and so I washed one cup of rice and added one and a half cup of water, brought it to a rolling boil over the stove. Popped it into the outer pot and left it for 2-3 hours.
The rice turned out deliciously fluffy. 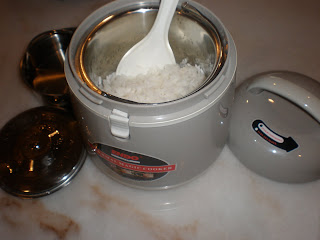 A closer look at the fluffy rice! 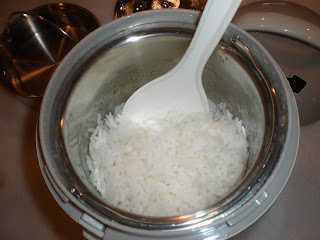 Since then, I've experimented with three different soups and each turned out surprisingly delicious. I've cooked chicken, ginger in sesame seed oil, soy sauce pork and more rice in the smaller pot and each time the dish turned out really nice!
I need to experiment more! *grinning happily*
Posted by Bento Pet at Saturday, July 09, 2011 6 comments: