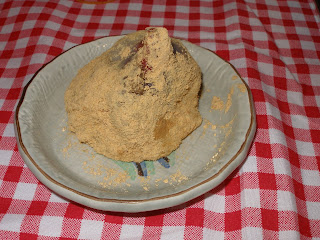 Daughter #2 really loves Daifuku mochi. She wants the ones from Isetan because it's nicer than the ones they make at Jaya Jusco! Eh! Hello! I have to take the train down to KLCC to pick them up and they are RM12.90 for a pack of three! Two or three times seem harmless when I'm there to stock up my groceries but this 'fix' that she needs is getting out of hand!

I spoke to my friend Alice and she said that she had a recipe for "Ichigo Daifuku" (strawberry mochi). Since I had some left over Anko (red bean paste) from my Dorayaki pancakes, I decided to try her recipe.

The first try cooking the "Shiratama-Ko" (Japanese rice flour) was a disaster. It was too soft and mushy. It was very sticky and got stuck everywhere!! Ewwwww......I decided to try again instead of wasting the strawberries (already wrapped in Anko). Look at the 'cacated' picture (above) from the first attempt! #2 said that it was 'sinking' and wrinkly plus she didn't like the 'Kinako' (bean powder) which I coated it with. Such a tall order from a 15 year old! Huh! 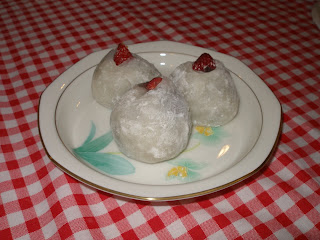 I tried cooking the "Shiratama-Ko" again and this time with less water and slightly longer. It came out very well. Firmer and less sticky. I coated it with "Katakuriko" this time. I was quite satisfied with the result but had to have the opinion of #2. "So how? I asked". "Not bad for a first attempt, says she, but need to improve on the texture". Aghhhh....What texture? "It needs to be firmer". Okay, okay, try again tomorrow!! Hmm...(I thought to myself) Let you eat until you 'pengsan'! 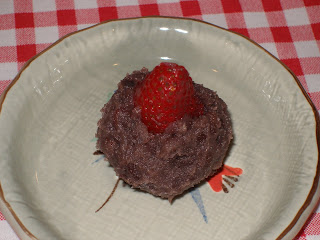 On the left is the "Ichigo" wrapped in "Anko" ready to be wrapped in mochi. The taste is really very nice, the slight sourness from the strawberry is burried in the sweet Anko and mochi - the blend is just perfect.

An afterthought: Perhaps, after one night in the fridge, the Ichigo Daifuku texture would be firmer? We'll see....tomorrow....
Posted by Bento Pet at Saturday, September 15, 2007 4 comments: