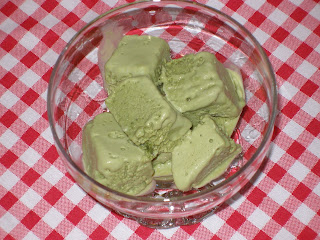 Daughter #2 made Matcha ice-cream again. She's really good at this. Saves me a lot of money now coz no need to order it for desert after a Japanese meal. I think Matcha ice-cream in the Japanese restaurants are over priced.

This recipe was given to her by the owner of 'Chikuzen' in Aman Suria which has since closed down. I shall ask her for the recipe and post on my blog soon. Jessica, one of the owners was formerly working with the Tropicana Japanese restaurant since inception and has had over twenty years of experience in the Japanese food business. I heard that she had gone to England to stay with her daughter. 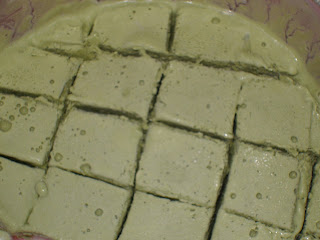 Jessica was very fond of daughter #2 because she had known her since we patronized the Tropicana Japanese restaurant for many years and when she opened her own outlet, we supported her regularly.

Jessica gave daughter #2 the recipe for the Matcha ice-cream and some other tips for her favorite dishes. I used to get a lot of my Japanese supply from her. Sadly, now I have to look for new suppliers.

Daughter #2 had acquired a love for Sashimi since she was ten years old. That time when we try out new Japanese outlets and Daughter #2 orders her Sashimi, for sure the waitress would reiterate that (read in Cantonese: mui mui, hai Sang Yee ah) 'it's RAW FISH" little girl! "Yeah! I know" (read in Cantonese: hai lah, ngo chee ah) would be the answer. We would all quietly laugh and jib her that "it's RAW FISH, little girl". 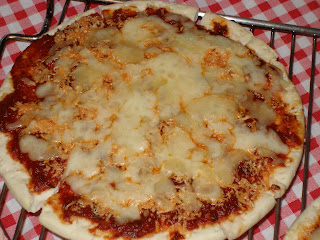 Well, she's grown into a wonderful young lady of 15 and still loves Sashimi, my partner in crime where Japanese food is concerned. She loves food and is able to cook a fair bit.

I was very busy this afternoon preparing for a party tomorrow. I left a pot of tomato based sauce (for spaghetti or pizza) in the kitchen and when she got back from music class, she made two cheese pizzas. Daughter #3 and I were ravenous when we got back from shopping and helped finish the pizzas. I thought for a first timer, it was pretty good. When she got the pizzas out of the oven, I heard loud 'Ooooo's and Ahhhhh's' because she took the whole grill out from the oven and burnt her fingers. Well, a lesson well learnt. There's no learning without the pain.

Daughter #2 is an accomplished pianist. At fifteen she's doing her Diploma, ABRSM in music performance. At the age of 13, she'd already decided to pursue a career in music. I'm quite happy she's found her niche in music and if music is what she wants, that's fine. 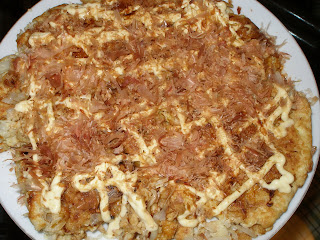 Today I was still giggling over the funny Japanese man who was trying to teach the people passing his exhibition booth how to pronounce O-ko-no-mi-ya-ki!

I decided to try out the recipe from the flyer I managed to get my hands on before Lavender dragged me off.

Method:
1. Beat raw egg and mix with water.
2. Stir shredded cabbage and flour in another bowl and add (1) and stir lightly.
3. Heat frying pan until quite hot and oil it. Pour (2)
Fry it till brown and flip to the other side and do the same.
4. Serve on a dish and load with Okonomiyaki sauce and Mayonnaise.
5. Sprinkle with lots of katsuobushi (dried bonito flakes).

My #1 daughter doesn't like the strong flavour of the Okonomiyaki sauce so I diluted it in water with a ratio of 2:1, 2 water to 1 Okonomiyaki sauce. It turned out very well and while eating it for dinner, I taught my daughters to pronounce O-ko-no-mi-ya-ki!!