It was Ash Wednesday yesterday, a day of fast and abstinence for the Catholic church. There was no bento. Ash Wednesday marks the beginning of Lent which lasts for 40 days. It is a period of self sacrifice and personal journey to change from within.

This morning's bento was put together in 20 minutes, a lot longer than usual because there was a lot of cooking involved.

I prepared the chopped salad and corn niblets last night, just topped with Thousand Island dressing this morning. The shrimps were also ready and de-veined last night. I deep fried it this morning. 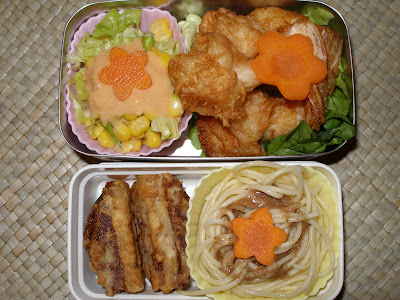 The yam (taro) and 'nien kao' was prepared and fried this morning and though very delicious, it took a while to cool down before I could pack. Imagine the fan at full speed and there I was manually fanning it desperately with a magazine to cool it down faster *sigh, the things I do*.

There was spaghetti from my frozen stash and that was topped with sesame seed dressing. I cut the carrot flowers last night and had them blanched in salt water this morning.

Even though I prepared so many things last night, it still took a full 20 minutes and by my standards it's way too long!

Note to self - too much cooking in the morning! Thus, requiring more time to cool! 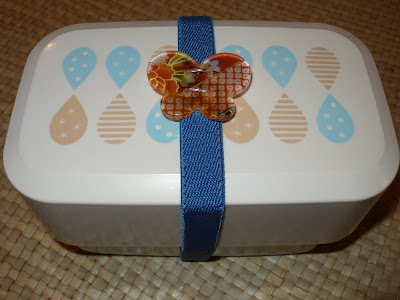 This box is already a common sight but don't you just love the bento strap? Butterfly - #2's favorite!

#1 had the same thing packed in her 3 tier box. Same food, except for the fried stuff.
Posted by Bento Pet at Thursday, February 26, 2009 7 comments: