Bento 224 and update on Choir competition

I posted my last bento about 3 weeks ago. When the mid term exams began for #2, she didn't want to bring bento to school because, according to her, there was no time in between papers to eat.

When the holidays began, the State level School Choir competitions began the next day which incidentally was also the Malaysian Choral Eisteddfod VII (MCE)! The DJ Choir was also competing in the Youth Choir competition at the MCE. Schedules were clashing the distance between the two venues were challenging!

Nevertheless, #2 managed to work it with all the necessary quarters even though it was quite a task. On the morning of the competition, we reached school by 6.45a.m. In the evening after two exciting competitions, she got home past 10.00p.m.

we won runner up at state. well, actually i was really really really upset. but then i realized, god probably wanted me to study. so yeahp. LoL.

the rest i forgot.

our second competition, we won 4th or a silver diploma - IX.
top in the state at least. :) and either 2nd or 1st in peninsula Malaysia lah.

first prize was won by Philippines. Those people are AWESOME!! :):)

So, today and for the next 2 days, she would be participating at the MCE and having another remarkable experience. I'm looking forward to the final day concert! I am just so happy too that she's finally got time to study for the year end SPM!

As usual, #2 has huge issues with 'FOOD' served at these crowded events for young people! So there is a need for bento but after 3 weeks I'm too lazy to crank up!!!

Just some baguette sandwich with smoked turkey ham and broccoli alfalfa with a squeeze of kewpie mayo! Plopped some cherry tomatoes for her to snack on. 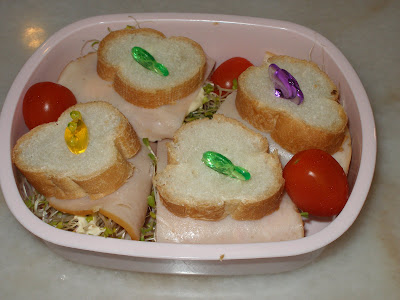 Read my last post on the School Choir competition if you missed it.