This is going to be the last Bento post for the week and fresh Bentos will be posted after 2nd February (remember, Daiso is re-stocking on this date).

I had brunch with #2 today. I made two Bentos of spaghetti and cauliflower doused in sesame seed dressing and some Chinese dessert call "Nien Kao" also known as "Kuih Bakul". It was a little nightmare trying to cut the "Nien Kao" into bits to roll them in fresh coconut mixed with some salt.

All I can say is it was sticky, sticky and sticky! I had oiled the knife before trying to cut through the "Nien Kao" but to no avail, I couldn't get a clean cut, it got stuck with the gooey "Nien Kao" all over. After a small 'war' between the knife and the "Nien Kao" and a lot of sweating and swearing in between, I managed to get them in bits all rolled up in the salted coconut!

The small 'war' was worth it because it was absolutely delicious! Now I know why my mum only does this after the "Nien Kao" turns solid after a week or so. It is so that the cutting process is much easier and she would oil a plate to steam the cut "Nien Kao" so that they would be soft and pliable again and then roll them in the salted coconut. 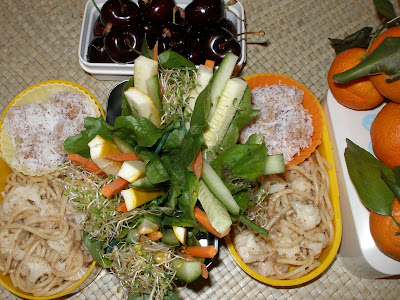 Right in the middle is a whole Bento box of cut up Kyuri, Zucchini, carrot sticks, alfalfa sprouts and Basil leaves wrapped up in some salad leaves. This is a delicious combination with the sesame seed dressing!

We had a ball with the deliciously sweet cherries and tiny mandarin oranges!