Last night at dinner, #2 was mumbling under her breath. She sounded like she was rambling about something. My husband asked her what was she 'chanting'.

She giggled and responded that she was trying to memorize some moral values for her exam. The astonishing fact about this is all high school students need to memorize these moral values throughout Form 4 and Form 5. There are 36 of them.

They have to be replicated word for word or else it is considered wrong. For the life of me, I cannot understand the logic behind this! If you're Malaysian and your child is in high school you'll understand this absurdity, otherwise you won't, it's okay. Just ranting a little.

I made an interesting discovery at the wet market yesterday. I was going to make steamboat for dinner and had discovered noodle konyaku. I used one last night and another one this morning. Initially, I wanted to simmer the noodle konyaku in some sauce because the konyaku takes the flavor of anything that it's cooked in.

Then, I had a bright idea, I just boiled it in water and just dripped some sesame seed dressing on it. It was just too good to be true. It's fragrant and crunchy texture was delicious. 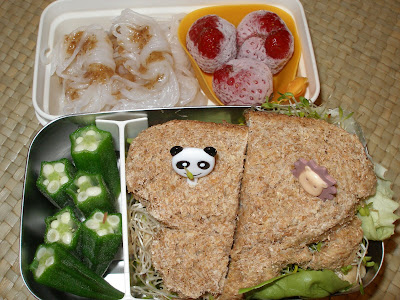 Today's bento box has #2's favorite vegetables - the ladies fingers. Ahem... a mackerel sandwich stuffed with onion alfalfa and some butter head salad on buttered bread. The mackerel in oil is from a can.
Posted by Bento Pet at Friday, March 06, 2009 9 comments: