There is a slab of "tenggiri" a.k.a Spanish Mackerel, fried and sliced into half with the center bone removed. I had to work very fast this morning to cool down the fish so the fan was on high speed all the time.

I blanched some sugar snap peas in salted water and added two cherry tomatoes for color. All the strawberries has been frozen for smoothies. 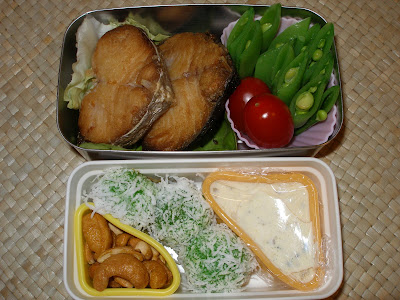 There is a little corner silicon cup of honey roasted cashew nuts and some store-bought, famous Malaysian dessert called "Onde-Onde" (pronounced ON-DAY, ON-DAY). It's a traditional Malay snack made out of glutinous rice flour and rolled in fresh grated coconut.

It is chewy like mochi and has a piece of gula Melaka a.k.a. Palm sugar in it's centre. I love to pop one of these into my mouth and experience it burst and feel the flow of the gula Melaka on my tongue. There is a mix flavour of sweet and salty in the chewy and crunchy (coconut) texture. Yummy!!

I have not bought mayonnaise or tatare sauce in ages. It's easy to make and much tastier. The only store bought mayo you can find in my fridge is the Japanese Kewpie Mayo. I have a recipe which I have not tried out for Japanese Mayo. Maybe one of these days......
Posted by Bento Pet at Wednesday, March 04, 2009 10 comments: