This morning's bento was a quick-fix. I was dazzed by all the medicine and antibiotics I had consumed and forgot to plan bento last night.

I only remembered that I have frozen ravioli in the freezer.

Everybody was sleeping when I awoke and there was a frantic rush to hastily knock doors to awaken those who were supposed to be ready for school!

I had wanted to make a cheese sauce for the ravioli but there was no time so it was just cooked in salted boiling water and tossed in a dash of olive oil to avoid them sticking together. There was a quarter of a piece of fried fish and a tub of tatare sauce.

Fruits of the day was watermelon and there were asparagus spears to munch on. 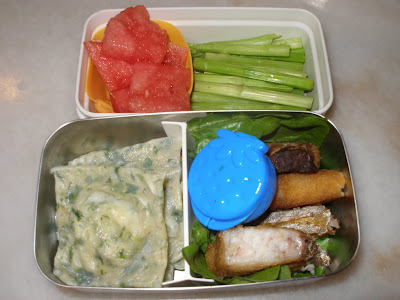 Not much to say about a hastily put together bento! *Yawns*
Posted by Bento Pet at Tuesday, March 24, 2009 No comments: