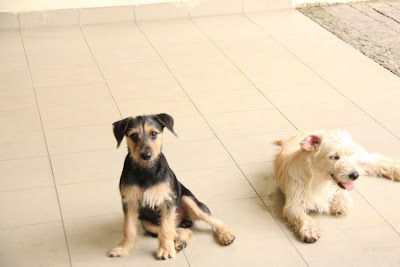 
Hubs was away for two days and the security in my gated community visited me twice!

Yesterday, a security representative rang my door bell and very pleasantly informed me that 'one of my neighbors' has complained about my doggies barking incessantly during the nights.

While we were discussing, my 'mat salleh' neighbor, came across and in a huff and puff kind of manner began griping and grousing about my doggies.

I responded by reminding him that we are neighbors and speaking for the first time in three years since he moved in, that we should maintain the conversation 'friendly'. It's obvious, this Briton has relocated via the "Malaysia - my second home retirement program" and loving this new place called home (he claims) he needs his beauty sleep in "Silence" of the night.

Apparently, over the last one week, my doggies has been a noisy lot, every hour from 3.00a.m. till morning. Anyway, to make the long story short, after some unpleasant exchanges, I managed to pacify my gruff neighbor and departed on 'friendly terms'.

Come Sunday, I got an urgent call from #2. "#%&@*&%$!!!!!! she garbled", I deciphered her distressed report and analyzed the short exchange we had and decided that I had to rush home. It had to do with one of the Jack Russel's bleeding profusely and some struggle with some other animal.

On the way home, I got another hysterical call about my maid trying to kill a 'Cobra'. I just pressed my foot lower on the accelerator and began praying. By the time I reached home, there was bliss and no trace of any previous commotion except for a wet and washed garage.

Apparently we had an uninvited guest. Not a Cobra but a monitor lizard! 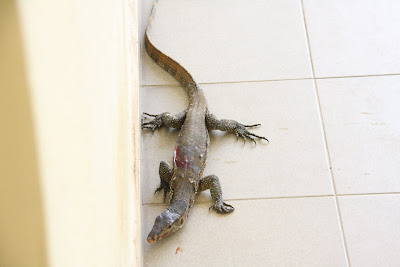 All the 5 doggies surrounded this four legged reptile. The 2 Jack Russel's attacked this two and a half feet long tropical lizard. It retaliated by whipping them with it's strong tail.

Imagine my maid screaming with #2 and #3, five dogs barking at the top of their voices and my neighbors living diagonally across, together with her 3 maids were 'cheering' for my maid to 'terminate' the monitor lizard. (My good neighbor, in the mean time called for security back up).

Thank God that my maid has in her own home 'tackled' these lizards before. Because I am truly grateful to her for 'protecting' my 2 younger girls. Apparently the monitor lizard had heaved it's breath, thus enlarging it's chest, hissed and leaped towards #2 but not before my maid yelled for her to clear off just in time. And thereafter %^&$%$#!!@, I think, it was finally terminated!

See the 'bloody spot'? That's where the Jack Russel's' attacked. 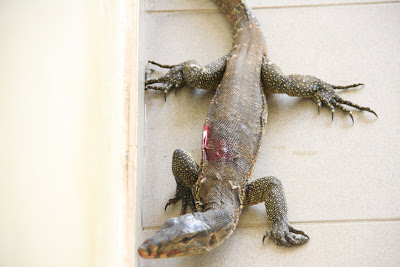 The security arrived after everything was over. Our uninvited four legged reptile probably landed into a hot cauldron that night, and into some happy stomachs! 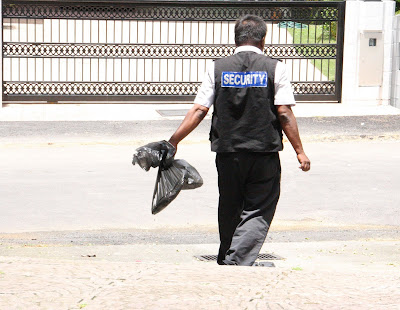 I never got to see anything but the the scratches on the two hero's noses. Listening to #2 & #3's 'trauma' right up to bed time was just too much. I slept at 4.00a.m. 'replaying' the entire 'story' in my mind till I slept as a result of exhaustion.

* pictures - courtesy of #2
this post has some 'gaps' in it's story because I don't want to include too many details.