The season of the mid Autum festival has come and gone. While I was looking for descriptive articles to link to, just so some people who are not familiar with this festival the Chinese celebrate get to understand it a little better, I found this article which I thought didn't describe the sentiments explicitly enough as having coming from 'experience' rather, it was researched.

I then remembered Terri's article which I read last year and which transported me back to the days of yore. She describes the history, the superstitions and the personal journey in the simple celebration of the mid Autum festival to the tee.

Like most Fridays, I try to end the week with #2's favorite Salmon fish. Today it's Norwegian Salmon from the can! See, I cut the moon cakes horizontally too, just to get the egg yolk even though I know in a double egg yolk moon cake I'm bound to get something! Old habits die hard!

In the same Bento box, I had some Ritz biscuits to go with the Norwegian Salmon. 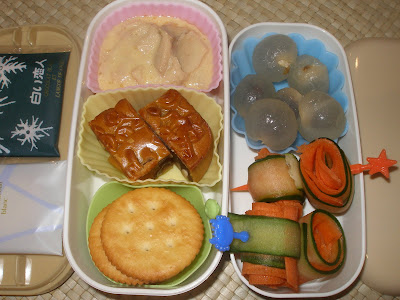 I got into a little 'debate' with #2 yesterday over the 'longan' which I gave her two days ago in her Bento box. She insists that they are 'mata kuching' and I think they are 'longan'. Honestly, I have no idea what they are because "I saw, I took and I paid" for them without asking for descriptions! Anyone recognize them?

There are some juicy rolled up carrots and kyuri (Japanese cucumbers) to accompany the meal. A sweet young lady left a comment in my post about the Japanese biscuits and informed that they are called `shiroi koibito`-white lovers?- A Hokkaido speciality. I put two into the top of the Bento box just for snack-king.
Posted by Bento Pet at Friday, September 19, 2008 5 comments: