Hubs bought a bag of 'lala clams' for miso soup on his last trip to the fish monger. I kept it in the freezer until last night when I decided to use it to make Spaghetti with Clams.

De-shelling them was a little 'nightmare'. I had to first boil them in water with ginger and spring onions to rid the 'fishy' smell. Then, I had to remove the clams from the shell. After all that, I had to wash out the sediments and broken bits of the shell. Finally I put the clams back into salted boiling water for a final round of cooking.

The preparation process for this recipe is quite simple actually. I just tossed some chopped garlic in olive oil and salt, added the clams and turn off the fire. Added some chopped Italian parsley, cooked spaghetti, pepper and salt, gave it a good mix and viola, it's done!

I prepared this last night so there was no hassle this morning. I only had to skin the Kiwi and chop up the vegetables. I am now using Yogurt to replace half the usual amount of dressing which I normally use.

This morning, I used half sesame seed dressing and half Yogurt. The dressing was mildly flavored with sesame seed and had a tangy taste to it. It was a good mix of flavors. 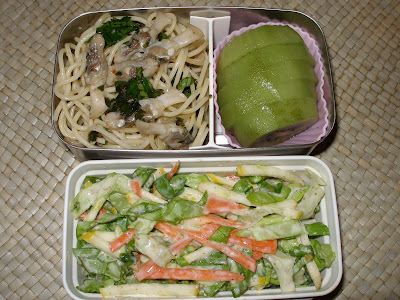