Happy New Year everyone! I'm back and been packing Bento for #2 and #3 (occasionally) since school re-opened on 5th of January 2009! I didn't take any photos because I had wanted to 'crank up' on the mood and get my supplies in order.

I also prepared a lengthy and word-y post on some reading material which I managed to read the week before school re-opened but decided against posting it.

Finally, this morning, after sending another Bento off to school for #2 and forgetting to take a picture of it, I decided to make myself a Bento for lunch. #1 has a lunch appointment, #2 is staying back in school for extra curricular activities - she has in her Bento some Macaroni and a tomato based sauce, a kiwi and some Onigiri. #3, when she gets back will have some 'wantan noodles'.

I just ate this and it's delicious! In the left box is some dried cranberries in the yellow silicon cup, two pieces of bread, some 'beef serunding' in the blue silicon cup and slices of fruit cake stuffed in between the gaps. 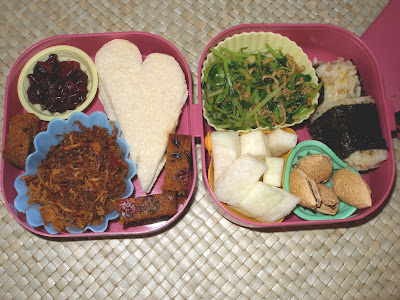 In the right box, there is some freshly cut guava fruits in the orange silicon cup, some pea sprouts fried with dried cuttle fish, two pieces of Onigiri and some cracked almonds.

I ate bits of Onigiri with the pea sprouts and serunding and it was delicious! The fruit cake was a gift and that too was awesome! The different fruits and mixture of tastes just adds on to the deliciousness of this Bento! No wonder #2 looks forward to her Bento every day! There's no question of whether she needs a Bento or not, it's expected!

Sometimes I forget how delicious a Bento can get. I'm glad I made one for myself today and it's got me more enthusiastic about preparing them for this year!