I baked bread yesterday. The recipe is called "Quick Wholewheat bread". It was quick alright, but the bread turned out very dense, mind you it's heavy not hard.

Either I have some very wonderful children who are great fans of my cooking or the bread was 'really' edible! LOL!!! Admittedly, the taste was acceptable, I just found it heavy and difficult to imagine making a sandwich with it. #1 ate it by dipping into fish curry which I cooked yesterday and she just went mmmmm..... mmmmmm..... so goooood.....! *mum gives a confused look* Well, one man's "bread" is another man's poison!

This morning's bento had some fried "meehoon" a.k.a. Rice vermicelli from my freezer stock. Then I skewered some kyuri and home made fish cake and plopped two cherry tomatoes into the box. *note to self: Need to find some alternative 'red' colored food!!* 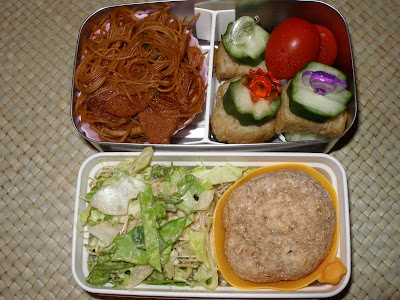 The salad in this box is basically onion alfalfa and some butter head tossed in a half and half mix of Thousand Island dressing and natural flavored yogurt. Aha! See that little 'heavy' bun in the orange silicon cup? That's been the main topic of discussion.

*edit*
#2 came back from school and over lunch she quipped "the bun was sooo niiiccceeee". LOL!!! *Happiness*
Posted by Bento Pet at Thursday, March 05, 2009 4 comments: