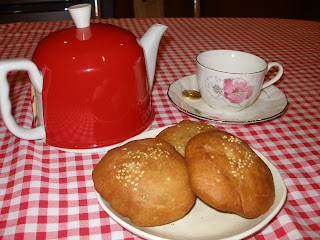 Occasionally, our Church Parent's group would organize activities such as talks, craft and cooking demonstrations to get the parents to gather and get to know each other.

The cooking demonstrations are normally done by volunteers and organized once a month. Yesterday, I went for the "Ham Chim Peng" demo. Actually they also showed how to make "Kap Choong" - the one with the pulut rice in the middle.

Method:
1. Mix "A" evenly and slowly stir in "B" and knead to for a soft dough for about ten minutes. Cover with a piece of cloth until it doubles in size in about one and a half to two hours.

2. Meanwhile, cook the pulut rice "D" as you would normal rice except you need to add the sugar in. After cooked, spoon out to make two rolls (like sushi rolls) of pulut. You need to roll it tightly to firm up otherwise it will break down. My mum said she'd prefer to put salt in than sugar, I think that's a personal choice so up to you.

3. When dough is ready, roll it out into a rectangle (like a swiss roll). Brush the top with water and sprinkle "C" generously and evenly and roll it up like a swiss roll. You can wet the edge to seal it.

4. Cut the rolled dough into 1 inch thick pieces, brush with water on the top and sprinkle with sesame seeds. Leave it for ten minutes to rise a little. Take a rolling pin and roll it a little flat and deep fry.

With Red bean paste filling:
You can divide the 'poofed' dough into small pieces and fill it with red bean paste. Do it just like making 'pau'. Flatten the dough around in a bowl shape and drop a 'ball' of red bean paste and seal. Use flour to prevent sticking. Leave it aside for ten minutes and use rolling pin to flatten before frying.

With pulut rice filling:
Just roll out 1/3 the dough like a swiss roll. Put the cooked pulut 'roll' onto the dough and roll up. Seal the edge with water and cut in 1 inch slices. Roll them flat and leave for ten minutes for it to rise and deep fry.

Note: This recipe for the dough is enough to make all three types of the above if you like. Just divide into three portions and fill with the different filling.
Posted by Bento Pet at Monday, September 24, 2007 14 comments: 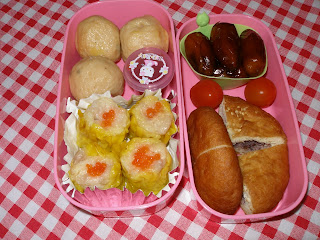 On Sunday School days, local parishioners of our Church would organize food sale for various purposes. Some to be donated to charitable organizations or the Church itself, some go to financing the local BECs (Basic Ecclesial Communities - similar to Cell Group) activities and outreach, others for other specific purposes.

Yesterday one of the BECs organized a food sale a.k.a. cafeteria. There were tons of food! Sarawak Laksa was delicious, so was the 'kwai lin kao', everyone selling behind the counter was a friend or acquaintance, so what do you think happend? "Ta Pau lah"!
I came home with lots of 'ta pau'. In the left Bento box are fish balls and 'siew mai' with a tub of chilli sauce (I still have 8 packets of 'loh mai kai' in my freezer). In the right Bento box is a piece of home made 'ham chim peng'. The best thing about the Ramadan period is we get really fresh and juicy dates that flood the market. Two cherry tomatoes to 'color' the Bento box! Today's Bento boxes took me 15 minutes to complete! "What a wonderful world..."
Posted by Bento Pet at Monday, September 24, 2007 1 comment: