I cooked a fresh batch of Ratatouille yesterday. It not only smelled heavenly, it also tasted heavenly. I'd forgotten how delicious it was!

My children asked for Ham and so, when I went grocery shopping yesterday I bought a batch of Honey baked ham. Actually, ham is a rare commodity in this household. It is normally bought during festive seasons and when there are occasional requests. There is a long list of reasons why I shy away from it and because I've ranted about it in previous posts so it's not going to appear here today.

Anyway, I cut the ham sandwich into nine pieces to fit this bento box. It could take four slices of bread and it would serve to fill #2's stomach well today. 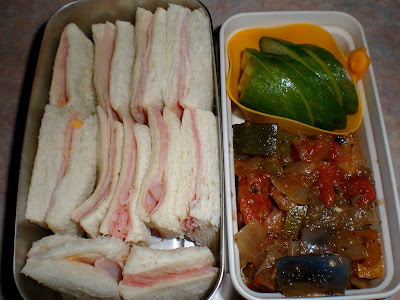 Ratatouille and sliced kyuri was in the smaller (right) box. I refrained from topping the Ratatouille with Parmesan cheese for #2.
Posted by Bento Pet at Tuesday, January 19, 2010 No comments: