School begins today after a week of holidays. #1 is back to college for the beginning of her second semester. She did pretty well for her first semester exams despite missing two weeks of it because of her participation in the WYD celebrations in Australia. Hubs and I are very proud of her!

#2 SMS'ed me from the airport in Seoul, Korea. She's boarding the plane back to KLIA in an hour's time and arrive about midnight. We were a little frenzied last night because the phone and internet lines were cranky and we couldn't communicate for very long before the line kept cutting off.

Finally we got her message that she had won the Silver medal for the Solo category which she competed in. I was elated! I didn't expected her to win anything because the week preceding the trip, #2 had been very sick and had 3 different doctor's consultation in 5 days! I am trilled and really praise God for the wonderful things He has blessed upon my family!

It was #3's first day of school after the holidays and she was grumpy that the holidays ended so fast!! I think that she was the only one who had a 'real holiday' because she slept over at her god-brother's house for 2 nights and on the fourth day had a great time enjoying a picnic near a stream in the Taman Tun Park.

Back home, we had a party on Monday night for some of our Church Youth team and then a "luicha" fellowship for some Priests' and one who was back here to visit family. Had a great time enjoying the company and delicious "lui cha". The visiting Priest was the one who initiated my first "lui cha" experience. He taught me the formula and how to cook it. His comment "Well done! You have maintained the standard well!" Hahaha! That made my day!

My lunch bento today consists of the left over "lui cha". See the black flask on the left? It's got my hot "lui cha" soup in it. The soup is a mixture of basil, mint leaves, peanuts, sesame seeds, pepper corns, tea leaves, salt, some bitter herbs, some 'jambu' leaves and some Thai coriander leaves. It's all blended together into a paste and mixed into hot boiling water to make a wonderful, aromatic herbal soup!

In the left bento box is a bed of vegetables on top of a layer of garlic rice. From top to bottom: Kai Lan, salty Choy Poh (pickled vegetables), Choy Sum, white firm tau foo and long beans. 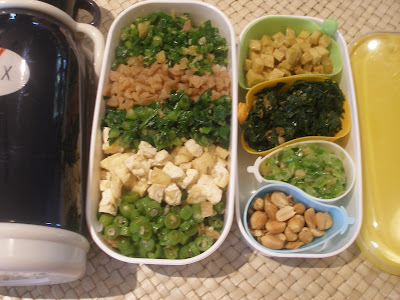 In the right bento box, from top to bottom: 5 spice tau foo, sweet potato leaves, leek and peanuts. This is an awesome meal. I love the flavor of "lui cha" because of the herbs in the soup and the lovely blend of all flavors from the vegetables and ingredients. Most of the items are fried with garlic and dried prawns so it's very aromatic and sweet.