I planned this Bento last night. I didn't foresee it being so brown in this orange two tier Bento box though! Nevertheless, I think this is one of those few times that I've managed to make a Bento box without any carbo. LOL! It's packed with raw and cooked vegetables, some protein and fruits.

In the left Bento box, I had some cut yellow and green zucchini and tomatoes tossed in salad cream. There is some boiled lotus root from last night's soup.

In the right Bento box, there's the ever favorite bananas topped with cinnamon sugar - a change from the regular Kiwi that she loves. Lianne suggested bacon bits with Brussel sprouts in yesterday's post, I thought it was a great idea so I improvised with broccoli this morning! There are some meat bits from yesterday's soup which I tossed in soy sauce.

Free and easy because I remembered to do my homework! Hahaha! I also managed to work out tomorrow's menu already! 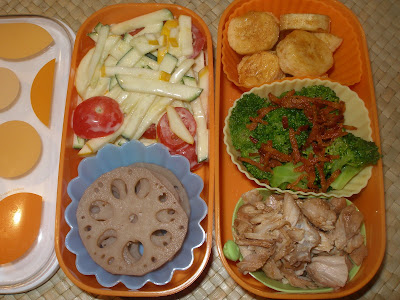